Get the dirt on your campaign traffic – introducing the Traffic Quality report!

By Jens Roland on February 10, 2015
In AudienceReport 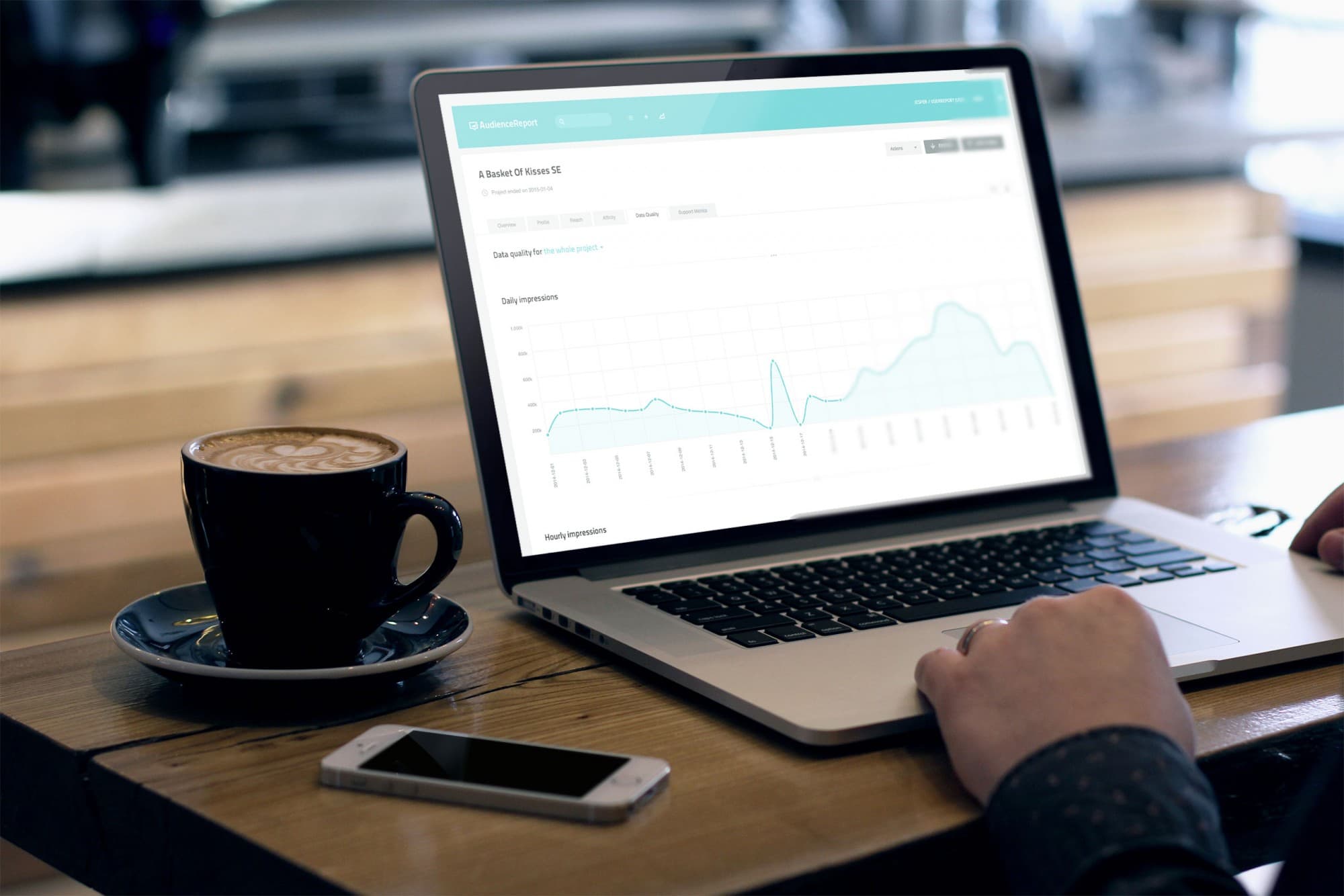 The new Traffic Quality report allows you to evaluate and document the traffic that you are buying or selling in 7 different ways.

The Daily impressions chart shows you the pulse of the campaign, and allows you to evaluate and document whether the campaign has been executed in accordance with the media plan. 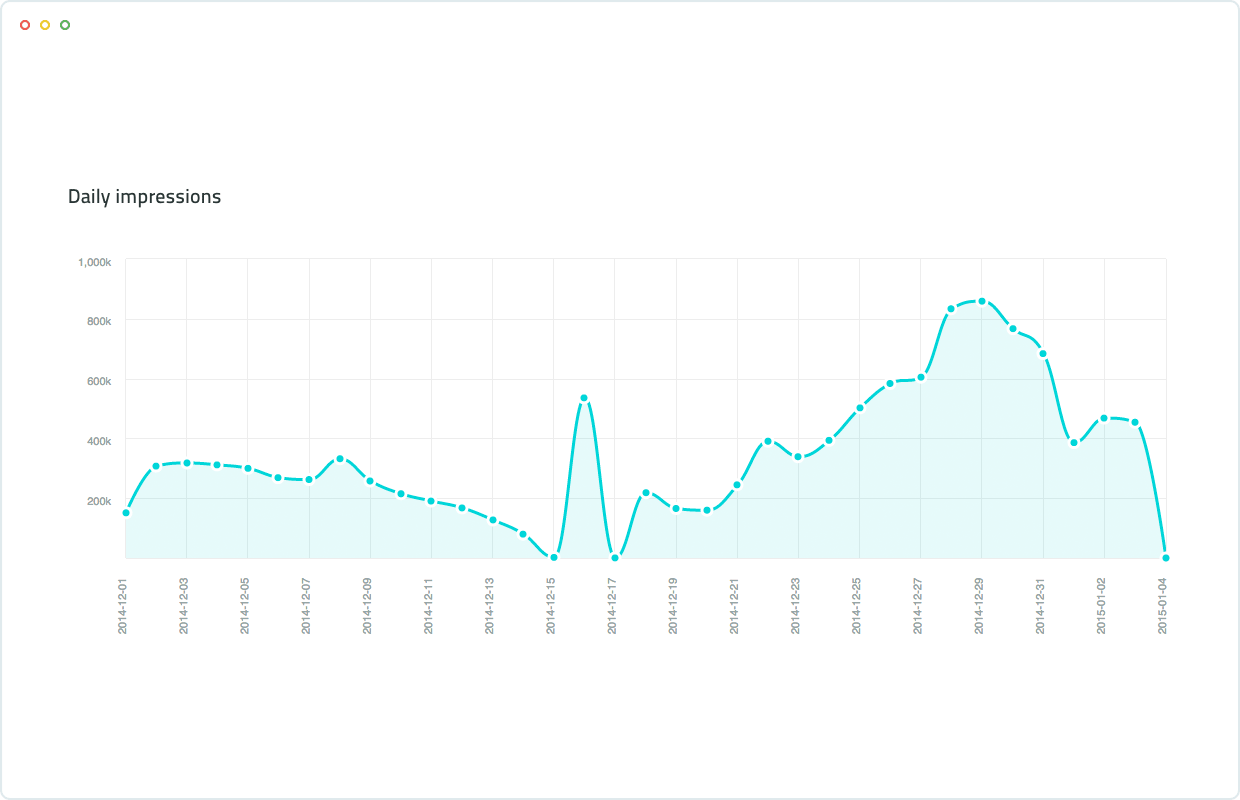 Looking at only the daily impressions, however, can be misleading. Hourly impressions also matter, since most impressions should typically be delivered during the day, and not at night.

A lot of impressions delivered during the night is normally an indication of non-human traffic or that impressions are being delivered from outside your intended time-zone. Therefore the traffic quality feature also contains a breakdown of the impressions by hour. The chart automatically adjusts to the time zone of the campaign. 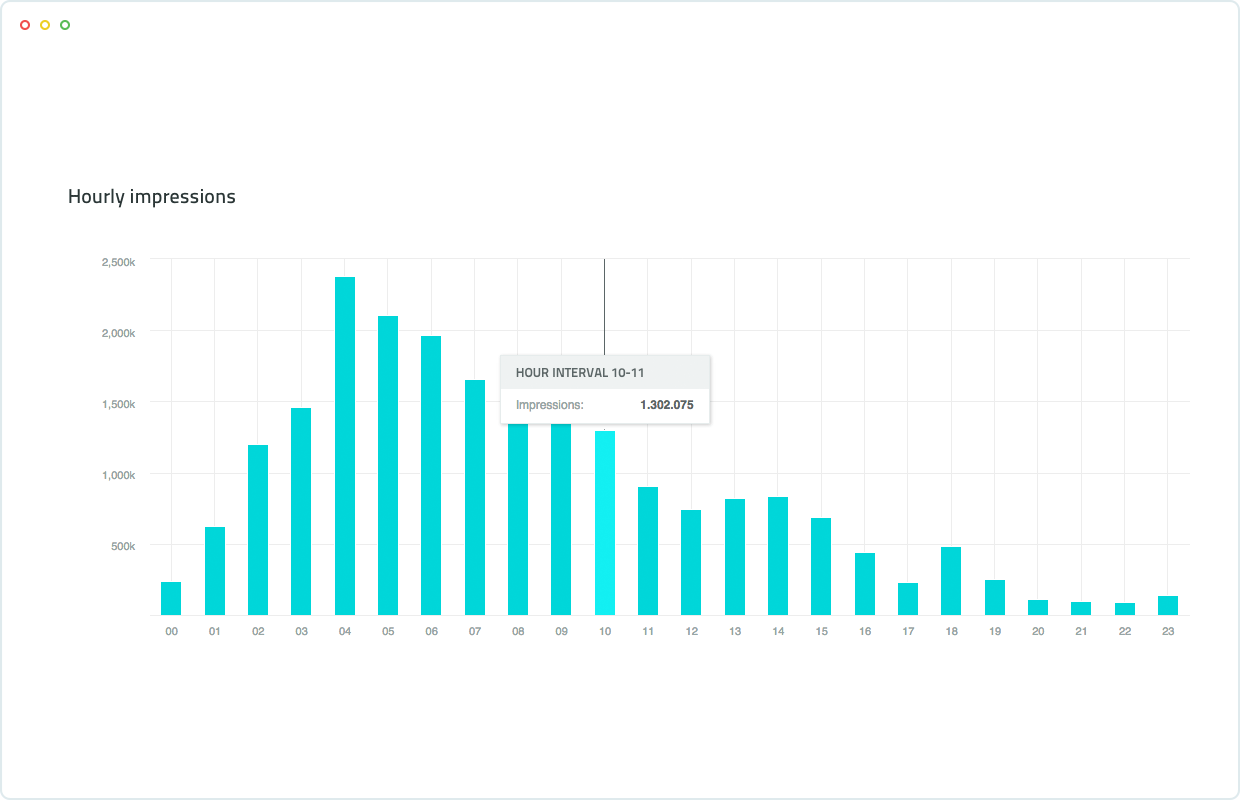 Getting the right amount of impressions on the right days and at the right time during the day is important, but it doesn’t say anything about whether the traffic comes from the devices that the campaign was targeted towards. This you can see in the device type ratio, where you can see the traffic split between desktop, mobile, tablet and other sources (mostly in-app). 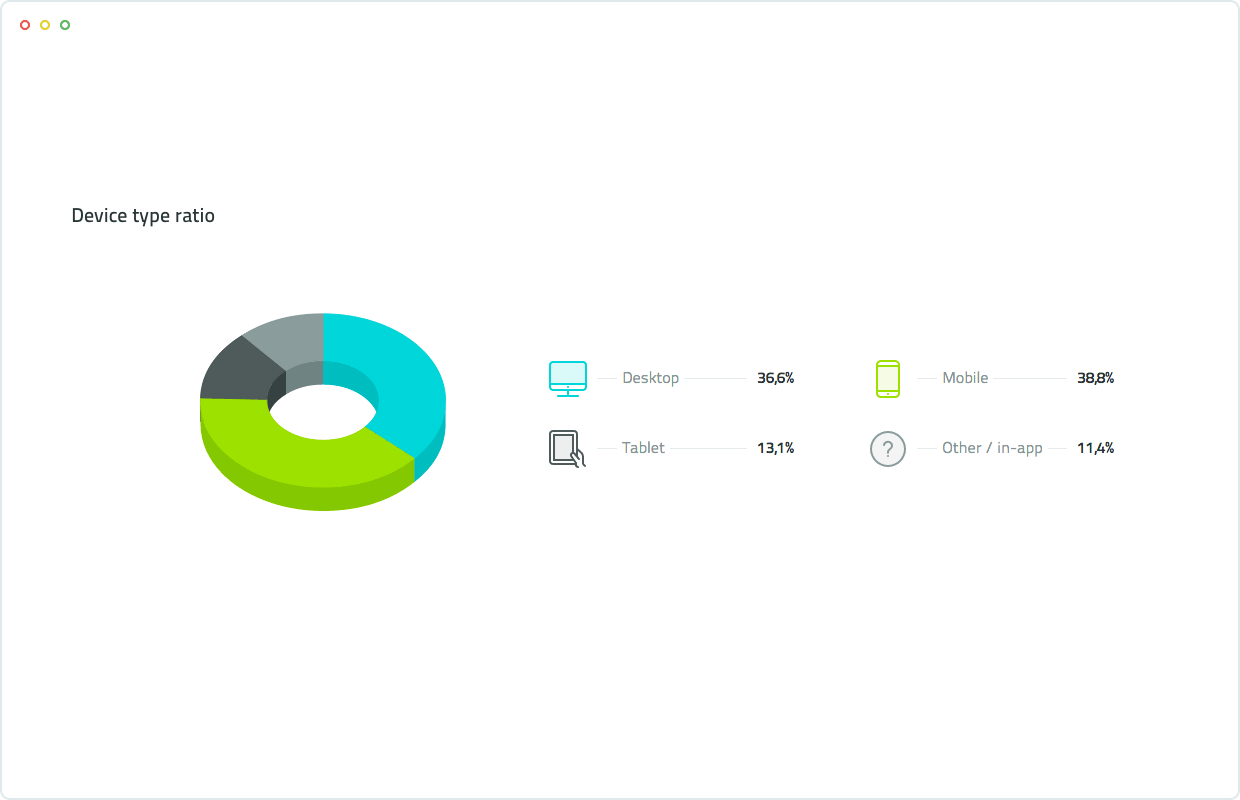 If the share of impressions with a hidden referrer is significantly higher than the average for the country of the campaign, it could potentially be a warning sign. Ask yourself why a provider is hiding the origin of an impression by obscuring the referrer? Is it network policy? Or an attempt to obscure the true origin of the delivered traffic?

The makeup of websites allows you to see, whether the execution of the campaign is in accordance with the media plan. 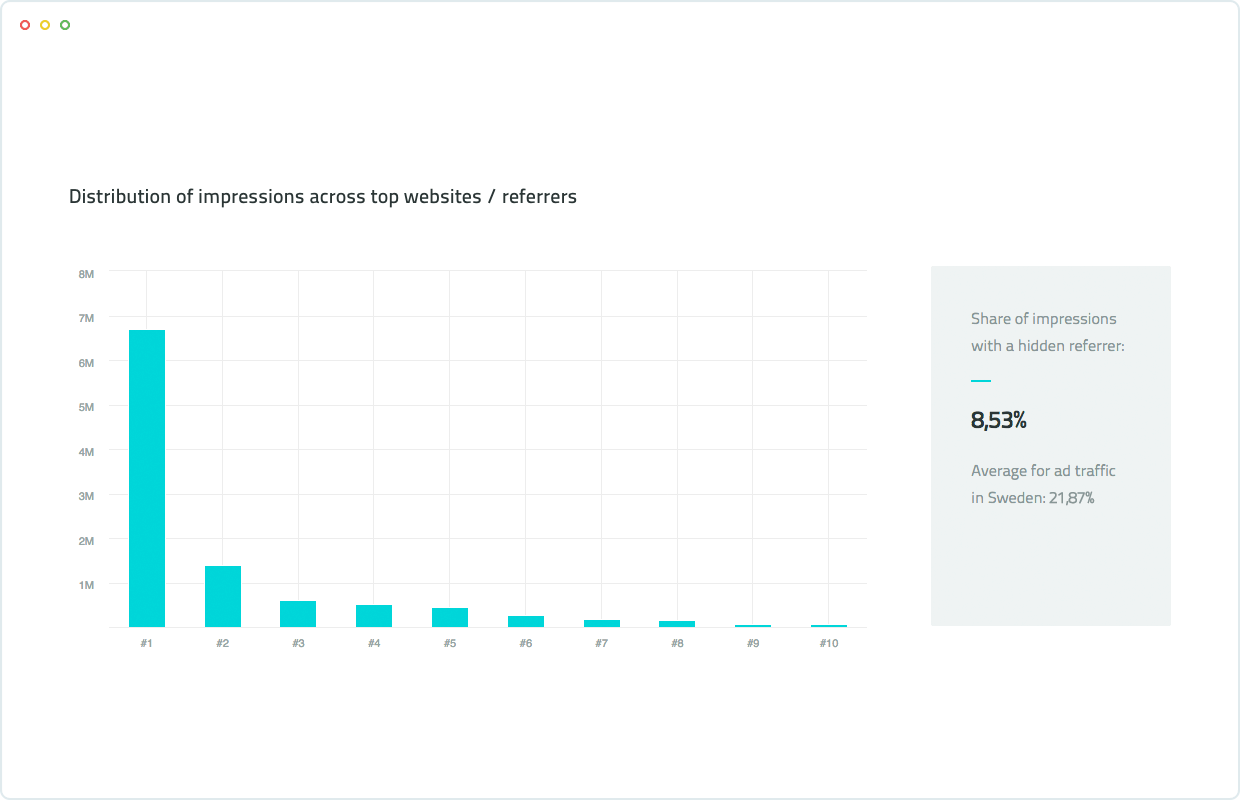 When looking at the top IPs it is important to remember that, if you are using a mobile network (3G, 4G, LTE and such..) you will share an IP with many others. The same will be the the case, if you work in a large office. Therefore, it is normal to see thousands of impressions coming from the same IPs as in the below chart, however, out of the total impressions they should still makeup only a small part of the impressions. 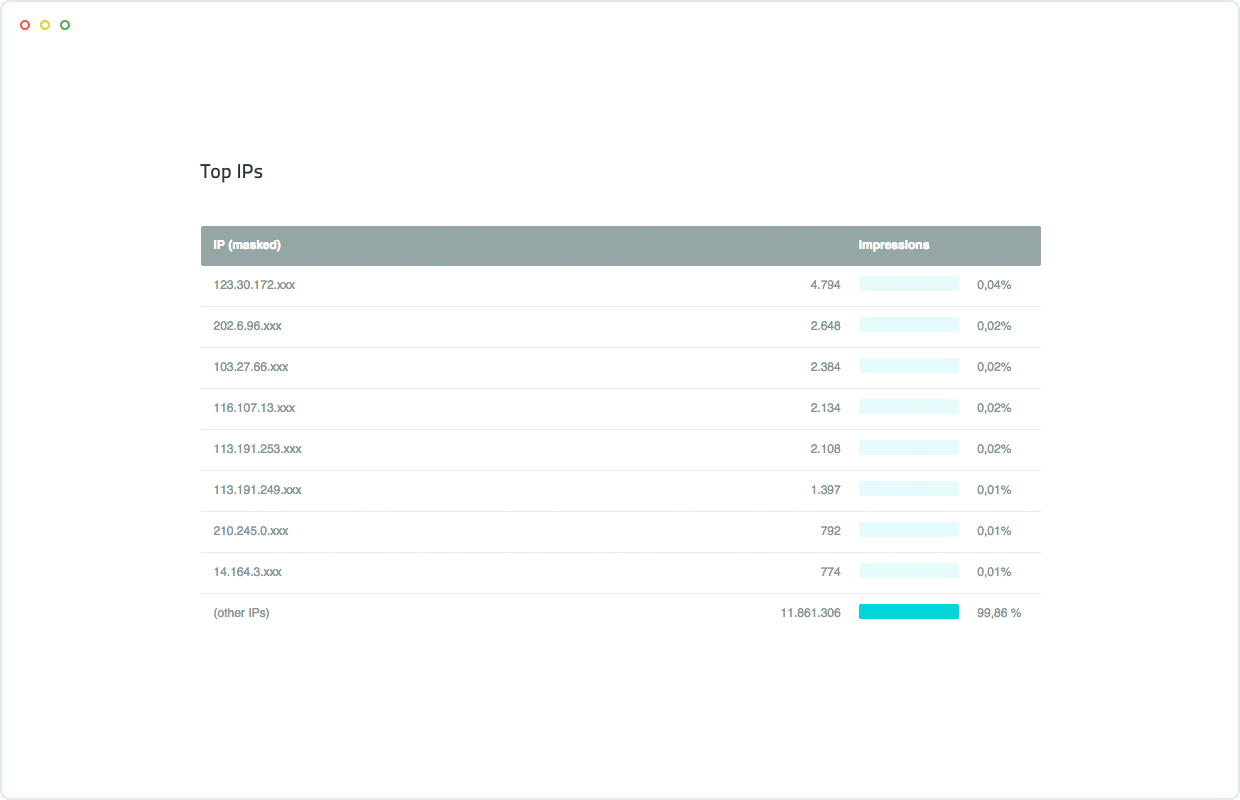 If you run a campaign in Denmark, the vast majority of the impressions should come from IP’s located in Denmark. There will, however, be Danes traveling or living abroad visiting Danish websites, which is why it is entirely normal to have a small percentage of the impressions coming from other countries as in the chart below. 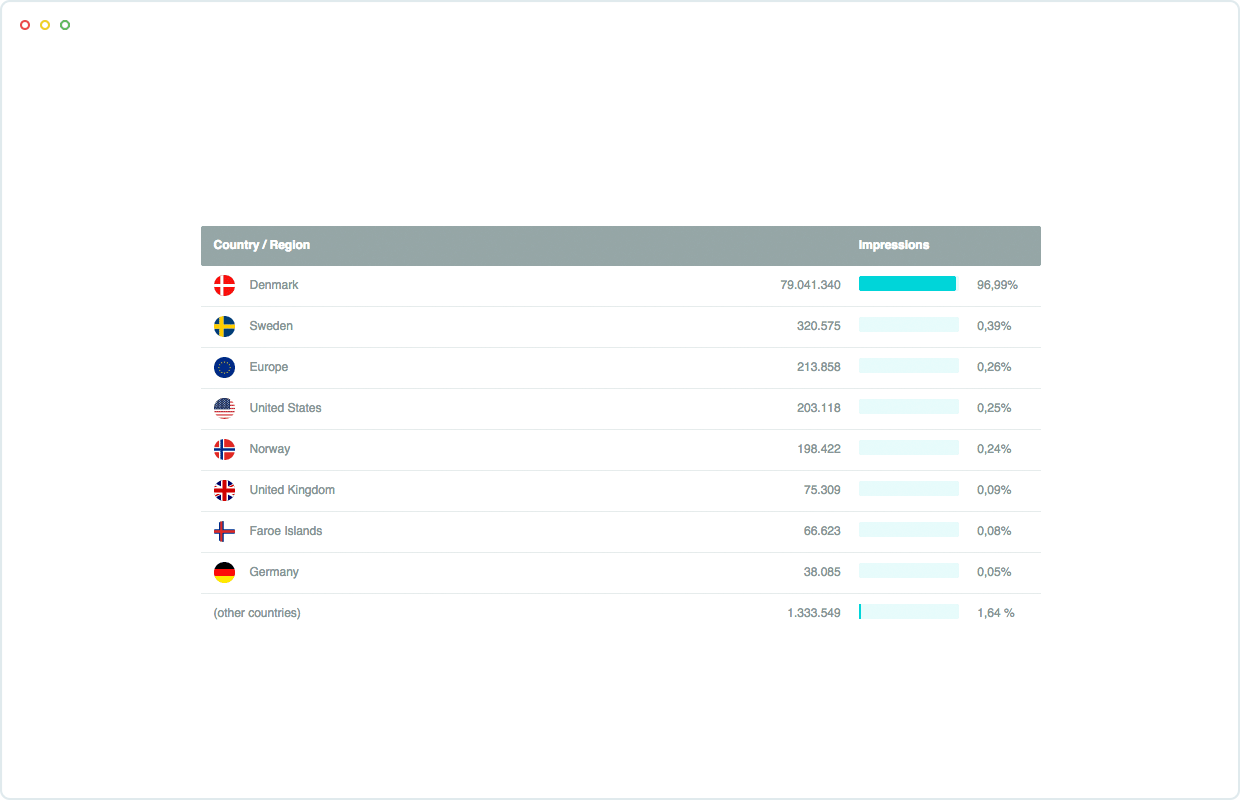 The final part of the traffic quality feature is the Cache buster ratio (available in track point view – see next section).

This ratio should always be 100.

Sometimes you want to dig a little deeper. That’s why all of the above indicators can also be broken down into specific trackingpoints.

Furthermore, you can control the time period you want to investigate by changing the report period – and if you’ve selected a specific track point, you can even drill down into specific dates. This makes it easier to troubleshoot bad performing trackpoints. 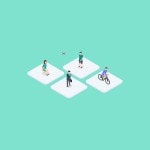 On-target reach: How perfect is not possible and why measurement is the only way to see the wood through the trees 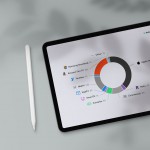 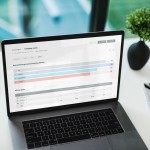 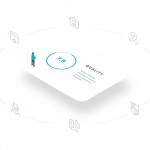 Measure the quality of your campaign impressions